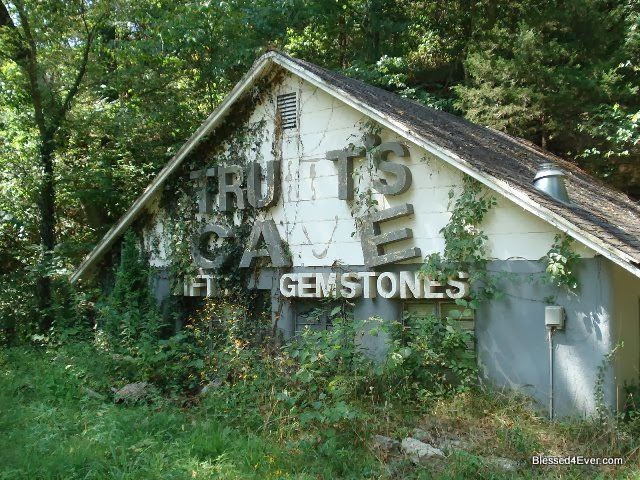 About a month ago my buddies and I went on our annual camping float trip. Along the way we ran across this neat little road side attraction that looked like it had all but been forgotten.   It took some convincing but I managed to get my friends to pull over so I could snap a few pictures.  The  place was pretty run down with everything being boarded and locked up.  I was able to get a few pictures through the windows but there really didn’t appear like there was much to see. It looked like a big rock room that went around in a circle.  It was cool looking but didn’t look like anything more than a cheap tourist attraction.

A few days ago a ran across the pictures and decided to Google the attraction name:  Truitt’s Cave.  I was amazed at what I found.  Turns out the cave was discovered in 1929 by a man named John Truitt who happened to discover 6 other caves in the Ozarks area.  Truitt’s Cave opened to the public in 1940 and had 60 years of life under its belt before it closed in 2000.  It was purchased by new owners in 2002 and remained open for another 2 years before being closed and put up for sale once again. In fact, for a mere $375,000 dollars, you can buy this gem off of craiglist!  Click Here for the Ad.

Here is a little bit more information that I found regarding this mysterious attraction.

TRUITT’S CAVE
Featured in “Ripley’s Believe It or Not.” Cave restaurant of yesteryear, with Underground River, Trout Reservoir, Root Canal Wall, Underground Geode, Endangered Salamanders and many rare formations. Learn of John Truitt, “Caveman of the Ozarks” who was the discoverer and developer of six area caves. Visit the Rock Shop, where amethyst, onyx, crystals, fossils, etc. are available. Walk down Waterfall Lane, Cross the Cedar Bridge, and pan for golden goodies at Truitt’s Frontier Flea Market, or just bring a lunch, and enjoy the Picnic Area. See one or all of three caves. Price Range $4.00-$6.00. Call for off season schedule. Have a super safe summer! 417-436-2299. Source – http://www.ozarkcaving.com/comcaves/truitts.htm

After seeing this, I really wish we had a better means in which to explore this forgotten memory. I would have loved to been able to go deep into the cave to check out its wonder. But, alas, boards and locks kept us away. Maybe someone will buy this one day and return it to its 60 year glory.